I am very interested in family history and always on the lookout for «new ones». For several years I have been trying to find traces of Olaf Olsen, Lupe Olsen and their adopted son Miguel Olsen.

Olaf Olsen sailed internationally as a cook on different ships. He was also a so called war sailor (krigsseiler in Norwegian) and was awarded with King Haakon VII Freedom Medal (unknown date) and the Norwegian War Medal (March 26, 1980) prime video gekaufte filme herunterladen. His registry number during the war was London 23800 and NY 12509. You can see more information in the war sailor registry.

His activities on ships is to a certain amount traceable:

The following information comes from an interview I made with my mother Else Pauline Nikolaisen (1944-) about Lupe and Olaf Olsen in October 2018.

We know very little about aunt Lupe as she was called by the relatives in Norway. My mother (Else Pauline Nikolaisen born Kaino/Olsen) referred to her as «Gouda Lupsiane Olsen» (creative naming), but her name was in fact Guadelupe Olsen (see passenger protocol further down), but used the short form Lupe Olsen. We don’t know her maiden name. Guadelupe Olsen was born appr. 1930 (1953: weighed 54 kg and 153 cm tall). Lupe is noted in the seamen’s protocol as stewardess of Mexican «race» but with Norwegian nationality spotify lied herunterladen ohne wlan.

Guadelupe Gonzales de Olsen was born January 21, 1929 in Veracruz, Mexico – as you can see from the register card from the Department for Seamen in Norway. She sailed on some ships together with Olaf Olsen.

The wedding picture (I will show this when I find it) of Olaf Olsen and Lupe Olsen was taken around 1950. Picture was taken in Veracruz, Mexico so we assume they got married there. On the backside of the photo it is noted «Pauline Josefine Olsen, Torjusholmen» (Olaf’s stepmother). Probably the photo was sent to Nils Olaf Olsen, Olaf’s father.

Exactly when they got married we don’t know (date maybe 1950-04-06), but in 1952 their honeymoon took them to Norway and Tromøy to visit the family herunterladen. The year can be specified by Else because she still lived in Dalene, Tromøy at the time, in 1953 she moved to Jonsvold, Tromøy. During the visit it was only Lupe and Olaf visiting.

In 1966 or 1967 Olaf Olsen, Lupe Olsen and Miguel Olsen travelled to Norway to visit the family gta run download. Between 1952 and 1966/1967 there were no visits to Norway. During the years Olaf stayed in contact with the family, but not in fact with his father or stepmother Paula. He wrote with Lillian Nilsen (born 1908-08-29) – a member of the family of his birth mother Beate Johnsen.

To be more exact: the visit was probably in the period April – June 1966, because the picture shows lack of snow and they were wearing light clothing.

When Lupe wrote in English to Jenny Elise Olsen to tell that Olaf Olsen had died («many years later than 1966/67»), Jenny turned to Lillian who translated the letter. This was probably after 1980, because Paula died that year and Olaf wanted his share of the inheritance. He didn’t get any, because there was nothing to inherit.

Else thinks that Olaf left Norway when he started working as a cook after his confirmation. He went ashore in Mexico and ended his career at sea unipark fragebogen herunterladen. The family was poor. He started working as a caretaker at the harbour in Veracruz, Mexico. He had to beg for food and money from the Norwegian boats coming there. Supposedly, nephew Nils Olaf Olsen (brother of Else and Ellen) met Olaf during a stay in Veracruz, we don’t know when exactly that was.

About Miguel Olsen: Olaf and Lupe couldn’t get children of their. After many years of marriage, they adopted Miguel who supposedly was found on their doorstep. But, Else says, Miguel was the child of Lupe’s sister. Maybe Miguel was born around 1960. Else did not meet them when they visited Norway in 1966/1967, because she was at sea. Jørgen Kristian Olsen told Else that Miguel maybe visited Norway one time later, but he was not sure adobe stock bild herunterladen.

Jørgen Kristian Olsen thinks this boat was owned by Olaf Olsen. His father (Kristen Olsen) was asked if he could repair the boat, but Jørgen Kristian is not sure if that happened. We can assume that he did, because Stig Petter says the boat was okay until about 1988. Olaf left the boat at his father’s house after the last visit in 1966/1967. When Pauline Josefine died in 1980, Ivar Lotfred got the boat, but give it to Nils Olaf Olsen (1948-2003). Now in possession of Stig Petter Olsen, Nils Olaf’s son.

In 1953 the passenger lists of discharged seamen of the ship Gypsum Prince show the 40-year-old Olaf Olsen and 23-year-old Lupe Olsen Download free gif. Lupe is according to protocol a Norwegian citizen! Olaf signed on in Veracruz, Mexico on 1953-07-28 and Lupe Olsen in Tampico, Mexico on 1953-08-10. That means that Lupe was born ca. 1930. 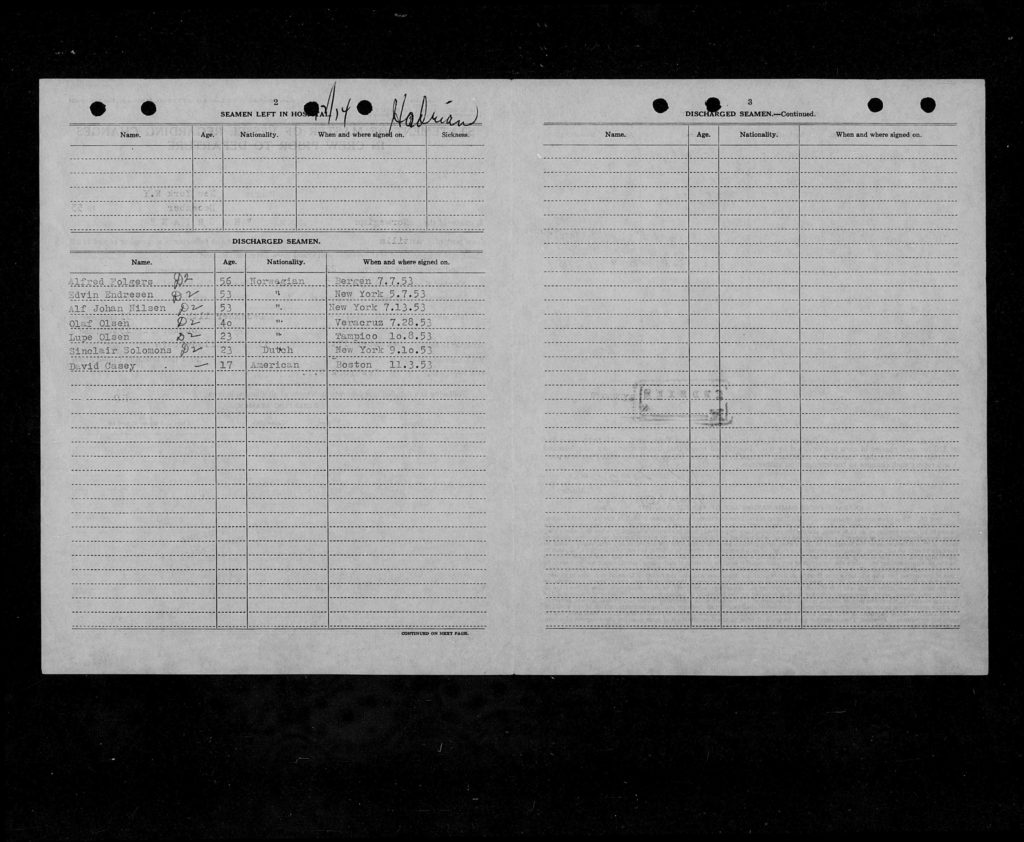 Another passenger list from the ship S/S Hadrian sailing from Antilla, Cuba to New York (arriving there December 11, 1953) shows us even more information:

Here we can see that the first name Lupe is in fact Guadelupe, and that she worked as a stewardess – Olaf is registered as the cook. Her «race» is noted as Mexican, but Nationality is Norwegian.

Olaf is in 1953 155 cm tall and weighs 91 kg, and Lupe is ca. 153 cm tall and weighs 54 kg. As you can see from the picture earlier in this text, there is a distinct difference in height between Olaf and Lupe, so the numbers mentioned in the protocol below don’t seem to be right herunterladen. 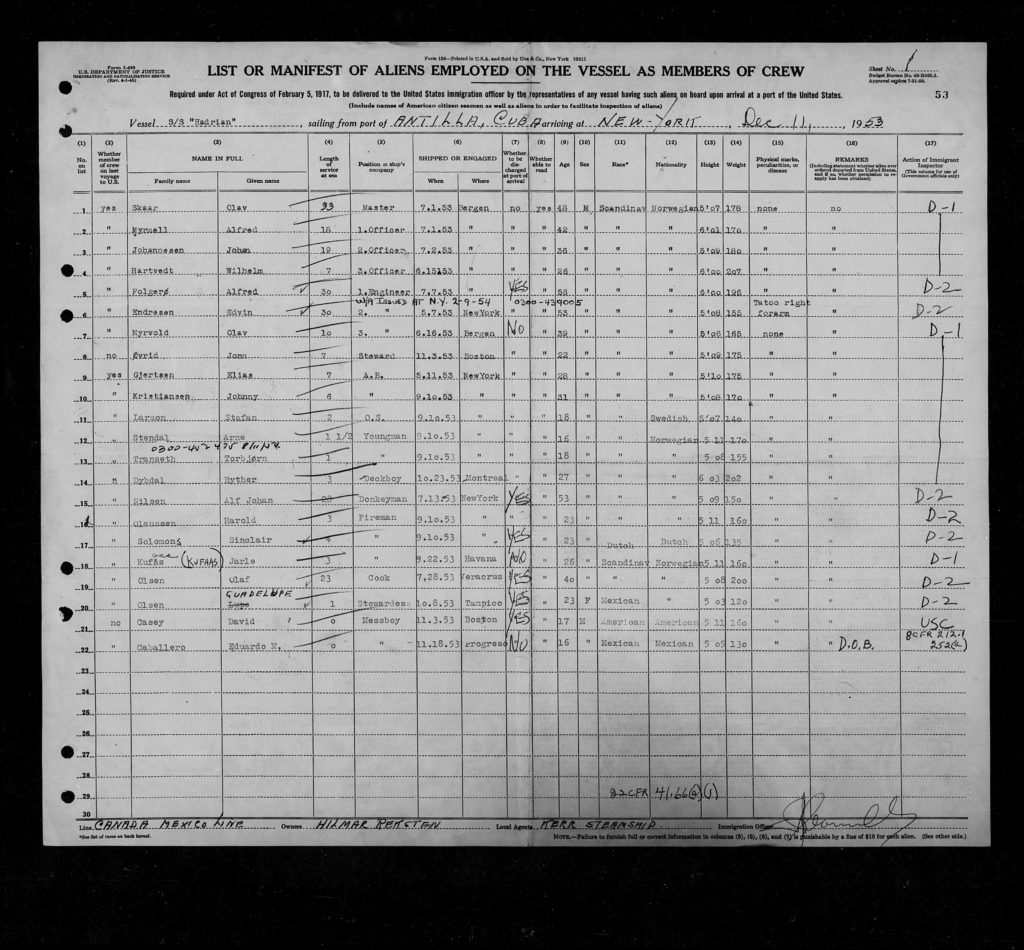 In the directory for seamen, Olaf is found with the following information (thank you, Jørgen Kristian): 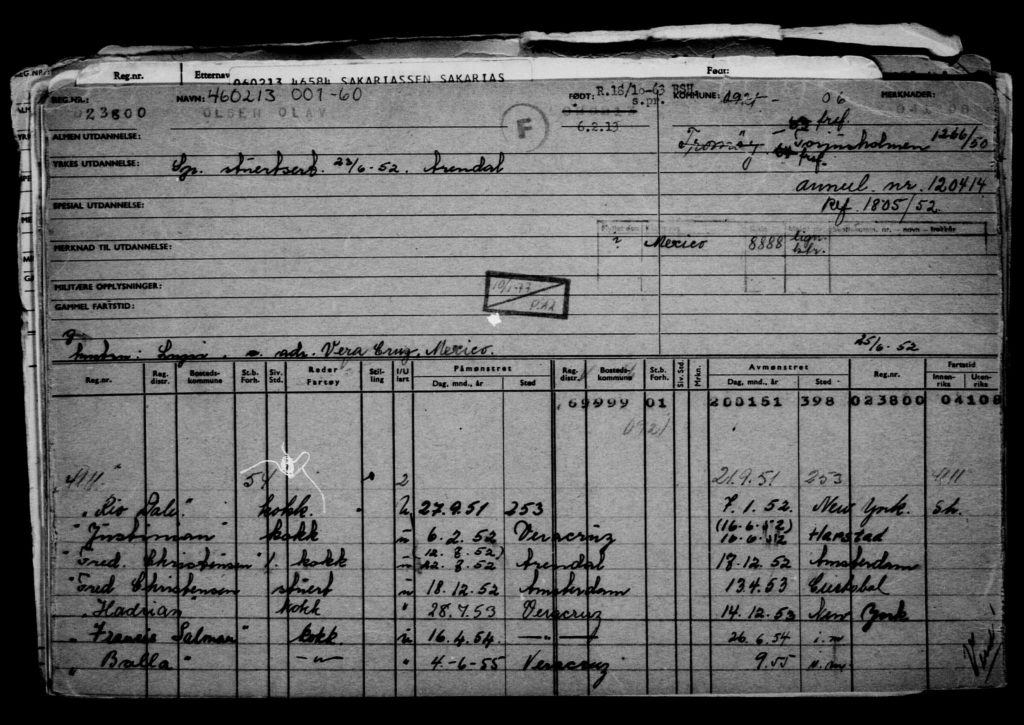 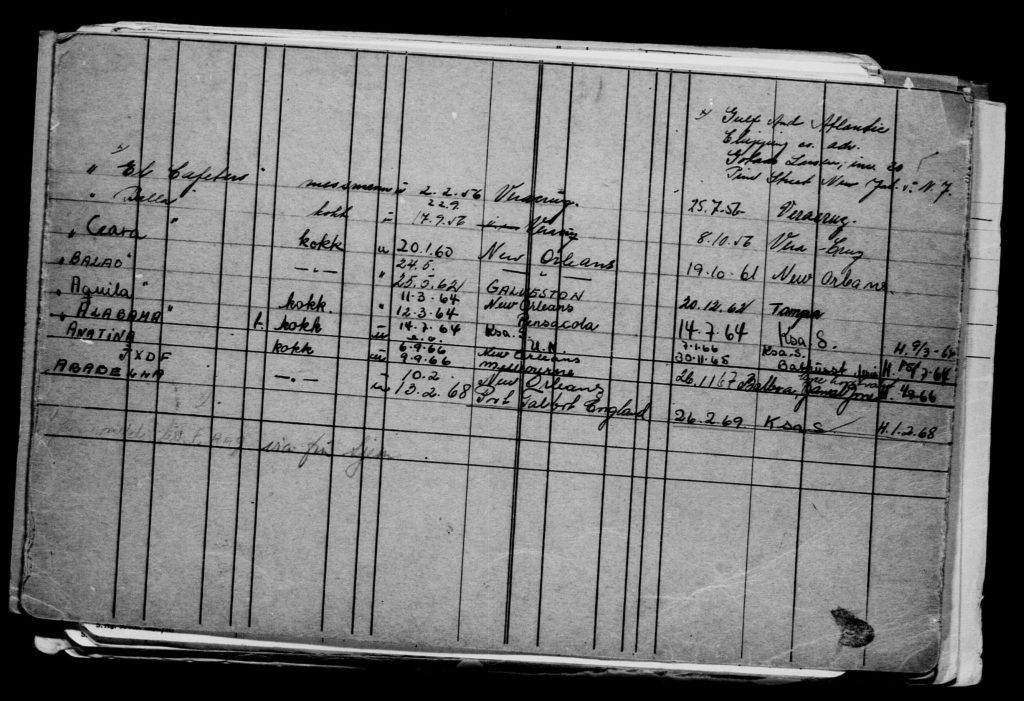 The record shows that Olaf Olsen sailed as a cook at least until February, 1969.

NEW INFORMATION: I will try to check out the ships he sailed on. Here is the first part:

THIS ARTICLE IS IN DEVELOPMENT AND WILL BE UPDATED SOON. IF YOU HAVE ANY INFORMATION, CONTACT ME VIA E-MAIL RUNE AT NETT24 DOT NO (written like this to avoid spam) OR FACEBOOK.

PS. If you think I write some dates and names several times and in a funny way, it is due to the fact that I write this text in case remote relatives search the internet. Search engines need food! 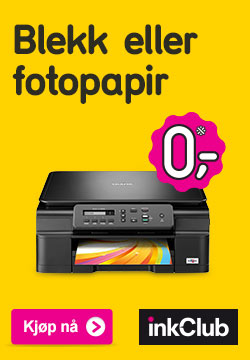